Jerry Snee, “Chief Squidgeter,” and Sean Snee, COO and Senior Vice-President for all engineering, are working together with the Squidget team to create a safe and noiseless alternative to the most disruptive and potentially self-harming fidgeting habits. It is a much sought after and preferred choice to other fidgeting toys currently on the market and deemed disruptive by teachers.

The Squidget was originally invented by Naomi Cher, Co-Founder of Squidget Company, Inc., to help her best friend. “Her friend experienced ‘deep nail pressure satisfaction’,” explains Jerry, continuing, “this means her method of fidgeting involved pressing her nails into her skin so hard that the skin breaks… which sometimes led to infection.”

Of course, Naomi did not like to see her friend suffering from her fidgeting behaviors, so she set forth to find a solution.

“Naomi is incredible with observing human behavior, and constructing a mechanical replication for it,” Jerry says. “The very first fidgeting solution she created was made of Sculpey™ clay and jewelry parts… and her friend still has it.”

The Importance of Fidgeting

The Squidget does not aim to eliminate fidgeting altogether. In fact, its creators are aware of the benefits of fidgeting, as supported by research (such as dissipating extra energy to enable focus and concentration, by activating the limbic system). In fact, approximately two million student-learning years are irrecoverably lost each year to disruptive fidgeting, according to an analysis done by Team Squidget.

“We’ve also found in numerous cases, fidgeting has been proven to be very disruptive when using most of the other available “Desk Toy” type of products,” tells Jerry, as he explains how the Squidget differs from many other fidget devices on the market.

“We created a design that is small, so it fits discretely in your palm—it’s like a hand babysitter,” tells Jerry. “It has seven attachments so you can choose which one best helps you focus.” These seven attachments are all designed to resemble different behaviors, including:

Jerry and Sean have already received plenty of great feedback about the Squidget from school principals, teachers, PT/OT experts, and of course parents and children. “We’ve even had someone who spends a lot of time on conference calls tell us that they never hit dial without picking up a Squidget, because it helps them stay focused on the call.”

Who is the Squidget For?

There is a lot of excitement about the Squidget from a variety of communities. The head of a Neurosurgical program has mentioned he would like to run an experiment using the Squidget to determine the effect it has on post-op recovery, commenting that he believes it may have “significant impact opportunities for patients.”

Educators are also very interested in the Squidget, as a proven and safe way to help most of their students focus in the classroom without disrupting other students. This is one of the ways that the Squidget sets itself apart from many of the cubical “Desk Toys” being banned in many schools. 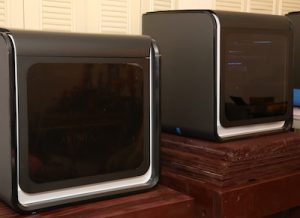 The Squidget team has three Afinia H800 3D printers in the “Squidget Cave”, and Sean has an H400 at home, as well. “We’ve 3D printed about 200 Squidgets in four months… which has partly been thanks to Afinia’s great sales and support team,” shares Jerry. “Zack, Mike and John are very knowledgeable, and have always been available to help us work through any hiccups we have. And the machines are workhorses. They’re often running 24/7.”

Using 3D printing has been a great way both to prototype the Squidget, and create the interim product prior to production injection molding.

“It’s important to us that the product remains affordable,” says Jerry. “We need to walk the walk. As a future “B Corporation” we have a very clear social mission… we aim to do good within the community and help people.”

If you’d like to help Squidget with their mission, please support them on their Indiegogo campaign that is launching May 31st, at www.afinia4squidget.com. The Squidget team has promised four special drawings (one for each category) after the campaign, should they meet their campaign goal, with potential prizes including Afinia supplies, or even a new H400 printer* for those pledging at the District Level.