In the Nick of Time

Youngblood says he was “plain lucky” to be the winner of the Afinia H480 3D printer. “I had a 3D printer at my last school. Then I began teaching at Central, which had a number of 3D printers… but they didn’t work well, and we sent them back. I was definitely excited, and thought it was great timing, when I found out I had won the Afinia H480 for my classroom a couple of months ago,” says Youngblood.

3D Printing for Engineering (and Science)

Although Youngblood teaches two separate courses (Intro to Engineering Design and Biomedical Science), he admits that the 3D printer is mainly used in his engineering class. “Our school works from a scripted curriculum. Since I received the H480 in the middle of the year, I’m re-envisioning this year’s assignments and creating a little different work that incorporates 3D printing, where possible… but mostly I’m looking forward to brainstorming more about how I can use the 3D printer to enhance lessons next year.”

Even though the engineering class gets the majority of use out of the 3D printer, Youngblood has put it to use for his science class, too. “I’ve printed things like models of the heart, which can be really helpful for teaching,” says Youngblood.

Getting Involved for Visually Impaired 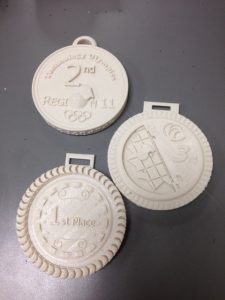 “One fun thing the class got to participate in this year was a project we did in conjunction with our Teacher Service Center,” tells Youngblood. “They were hosting a competition for visually impaired students, and asked if my students would like to design a medal for the students that incorporated braille,” Youngblood explains, adding that the project went really well. “The medals were up to three inches in diameter, so we printed them, did some prototyping, and then sent the designs.”

The competition recently came to an end, and the students were awarded their medals. Fortunately, Youngblood’s class was able to view the award ceremony. “It was really neat to see. The visually impaired students were feeling the braille, reading it as they got their awards. I think it was impactful for my students to watch—to see how their designs were being used,” adds Youngblood. “I’m hoping to do more projects like that, as well as projects creating smaller items so that my students can go home with their own 3D-printed designs.“

“So far, the Afinia has been good. I have some experience running 3D printers, so whenever something goes awry, I can usually fix it,” explains Youngblood, who is a self-proclaimed ‘tech hacker’. “I did fix a filament jam once for the Afinia, but otherwise it’s been terrific. I haven’t had a problem since! It functions great, and I especially like using the BuildTak on top of the regular perf board.”

“When the 3D printer was first out and running, the students were pretty amazed. They are more used to it running in the background now, but if it is one of their designs printing, they are still intrigued by it. I’m eager to do more projects next year so my students can create things they can take home. I have shown them how to create files in Inventor, but haven’t shown them yet how to put it into the Afinia software. I’m planning on setting up open hours to discuss that. There was one student who came to me outside of class and asked if he could 3D-print a Mother’s Day keychain he had designed.”

“Overall, I’m really happy to have the H480. It was a total surprise to have won… but I’m really looking forward to being proactive with it next year!”