Getting Inspired by 3D Printing

The first time Brian Miles used a 3D printer was a couple of years ago, when his school’s industrial tech class got a 3D printer for their curriculum. “They were doing 3D drawing, imaging, and drafting, so they acquired a 3D printer, and let students try it,” explains Miles. “After that experience, I wanted to get another 3D printer for the school, because I thought it would be an amazing tool to have. The industrial technology’s 3D printer stays in their classroom, so I wanted the new one to be school-wide.” Miles says the 3D printers increase students’ engagement with technology, which is incredibly important to their district. “They have so many questions about how it’s made, how it works, etc.,” Miles says.

Taking on Learning with New Technology

Miles was pleased that the school approved his request to purchase the Afinia H800 3D printer the fall of 2015. “I had talked with the industrial technology team, and they were very happy with the Afinia brand, so that’s partly why I chose Afinia, too,” Miles explains.

“I did some extra research and also saw that the newer H800 was enclosed and had the HEPA air filtration system, and it seemed like an excellent option. Plus, with a reasonable price, it just worked for us. Now, I have the H800 and use it for my “tech corners” in the morning. I talk to students as they come in, and spark their interest… they always want to know how they can 3D print.”

“It’s really nice to be in a school that supports new ideas and technology,” admits Miles. “3D printing is especially intriguing to me because it allows kids to see something made from start to finish. They come from a world where they just have things. Often, they don’t know where those things come from, or how they are made, so the 3D printer is extra neat for them.” Miles says the 3D printer even consumed him for the first week he had it. He says, “For the most part, I was able to rip open the box and make it work. I spent lots of time printing things and adjusting… teachers would check in to see that I was OK and see what I was printing!”

“My favorite thing about introducing 3D printing technology into the schools is seeing the excitement of staff and students. Part of my job is to work with teachers to use technology in their classrooms. The Afinia 3D printer gives me a great opportunity to show them something cool and explain how to implement it into their curriculum.”

Miles is currently discussing with teachers how to work the new technology into their art and social studies curriculum. “For the social studies classes, they are 3D printing board game pieces, so I’ll be working with students on 3D imaging,” Miles says.

Miles has found that using 3D printing is also great for community building. “We recently did a marble run, where we rolled out a bunch of butcher paper on the floor, and had students map out the coolest version of a marble run that they could think of,” illustrates Mikes. “We’ll design and 3D print these pieces, and put them together so the marble goes down through one piece to the next piece and so on, like in the game Mouse Trap. Many people think of 3D printing as a solitary activity, but I’ve found that this is a great way to bring students together and make it a more collaborative experience,” he adds.

Giving Students the Freedom of Choice with Maker Days

“One fun thing we did recently was hosting a Maker Day. We had it the Friday before winter break, and it was a day consisting of students making stuff. There were different stations they could go to, like computer programming.” 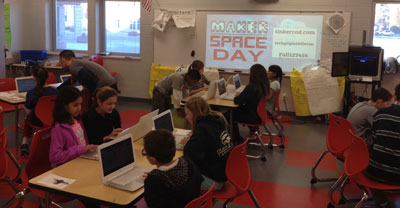 “One station was 3D imaging and printing, where I had students build whatever they wanted, and then they voted on their favorite designs, which I’m printing now.” Miles explained that many designs had to do with re-creating characters from movies, but the winning design was puzzle box. “The box is printed in four flat pieces and put then put together,” explains Miles. He adds, “The whole day was lots of fun, and the feedback was great. Students love having choices on what to do and where to focus their learning, that day.”

3D Printing for All

Miles also teaches technology classes at the library during days in the summer, and after school in the fall/winter. “They recently got a 3D printer, so we’re beginning some 3D printer classes for families on Saturdays, where parents and kids can come and learn how to make things” he says. “The library is trying to figure out protocol for the process of printing something on their printer, so that once people know how to do it, they can schedule printing time and complete their designs on their own.”

“I’ve experienced a few issues while 3D printing, but they were all before I knew how to troubleshoot. They were small issues, like a nozzle clogging… which ended up being user error (since I didn’t calibrate the machine),” Miles concludes. “At first, I knew what the problem was but didn’t know how to solve it… but then I pulled out the instructions on how to take it apart and fix it, and it was easy to do. Overall, it’s been a great machine for me. It’s easy to use, and simply works well!”