Clark Barnett is an Educator and Education Technology Consultant in Thousand Oaks, CA. He is currently part of the Conejo Valley Unified School District and an Adjunct Professor at Pepperdine University.

In education circles, he’s known for his Ecosystem and build-a-bug Entomology labs.

“I was trying to figure out how to really engage my 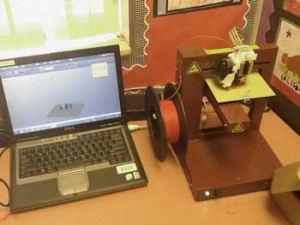 students because Ecosystems and Entomology are subjects that are far more interesting to experience than to read about. Fortunately, I got my hands on an Afinia Desktop 3D Printer last summer and the teaching ideas just began to flow. I decided to tell the kids that the classroom was an Environment in which an insect lived. They would get to design their own bug, describe how it interacted with its environment and 3D print it.”

“We started talking about living & non-living things in environments, decomposers, and other insect types. I found that I could also teach other curricula standards by working a writing assignment into the lab.”

Rote Memorization is In the Past

“Entomology requires students to know a lot about insects and their parts. Instead of having them memorize this I used experiential education. When they are designing an insect the kids want to know what the parts are called. In my opinion, this is a much better way for them to learn, as opposed to rote memorization. I also included in the curriculum links to kid-friendly entomology web sites so that they could study on their own. One student got so excited about that extra knowledge she brought a giant, live, bug into class (which we studied). That’s what’s great about being an educator.”

“I became an educator for a couple of reasons. When I was growing up, I had lots of younger cousins and enjoyed spending time teaching them about what I knew. As a young adult, I had a lot of interests and couldn’t settle on a major so I thought education would be a great course of study, where I could continue to learn about many different subjects.”

“As a teacher, I always thought that I taught like everyone else, which I have found is not the case. I’ve learned that at the core of teaching is planning how to present information. I’ve moved to a more student-centered teaching pedagogy, which puts more of the learning in the kids’ hands. It’s definitely different than what my colleagues do. We all plan together; I just use technology that they are not familiar with, yet. I’m teaching them, though.”

“I serve on our District Technology Committee. Our District Superintendent believes that there are a wide variety of teaching styles and “different” people like me should be encouraged to develop their craft so that they can teach their colleagues. I feel like I’m supported.”

“The feedback that I get from my student’s parents is that they are really happy with what their children are learning. They have also told me that, in many cases, their children surpass their own technical knowledge. Few of my parents understand 3D printing. In fact, some initially thought that 3D printing was printing an isometric drawing on paper. They quickly learn what 3D printing is when their child brings home a model that they have created in class.”

“One of my students brought in a squirrel that was made on the 3D printer at their parent’s office, so there’s a wide variety of parental knowledge. Speaking of parents, as you know, educators are always looking for funding. Fortunately, I have one parent who is a grant writer. She is helping me get funding for more 3D printers. I can tell that this technology has really engaged our parents.”

“Other parents are willing to put in their own money to help expand 3D printing in our school. They understand that it is big, and getting bigger. This might sound surprising until I tell you that the major employers in our area are Amgen & the Jet Propulsion Laboratory. Many of my parents are part of our large, local scientific community. Even though we were studying insects, there is a lot of engineering involved. For example, the legs have to be designed to support the weight of the bug’s body. 3D printing makes it easy to bring in engineering techniques and see how things work. It’s kind of like sped-up evolution.”

“A few years ago we were working on an electronics unit and happened to get interactive whiteboards installed in our classrooms. We also received some really expensive projectors that used an infrared sensor to run the smartboard software. In trying to find a more cost-effective solution, we found a Wii remote hack that did the same thing. One of my colleagues, Dr. Carl Friedlander rigged up a magic marker with an infrared sensor and it worked pretty well, except in my classroom because there was too much sun. 5 years later I happened to show the prototype to the kids, they got excited, so I gave them the pen to see what they would do with it.”

“The very next day they said, “Let’s take the thing apart and reverse engineer it.” They figured out how to improve the pen’s performance, figured out a bill of materials and put together a proposal for student counsel. They asked for $500 because they wanted to make one for every teacher in the school, and got the money. We’ll be 3D printing the cases. What a great Real World exercise that was!”

His Wish for Students

“What do I wish for my students? I hope to see them in an engineering field. I want them to use technology and make and fix things in their own homes. I’ve been trying to build inquisitive minds and give them the confidence and skill to figure things out. 3D printing accelerates learning those types of skills. For example, for science projects they will print out a replica of the molecules that they are working on, or the different phases of a plant’s life cycle. I want to expose them to the tools and give them the skill to know when and how to use technology.”

A Bug In His Pocket

“I’ve seen quite a few transformations in my classroom. One student, in particular, was having problems finishing projects. I decided to train him on the 3D printer. He had the first bug done and he just glowed when it finished printing. He now takes it with him wherever he goes. His parents and I discovered that when we invested time talking to him about where he could improve, as opposed to talking about behavior issues, he was able to move forward.”

“I have another student that used to get into trouble because he has lots of energy and has difficulty focusing. He got excited about 3D printing and his energy has been channeled. Now, he feels he can do anything and his parents say he is more confident and is enjoying school. Everyone is thrilled to death.”

“Now, I’m not suggesting that 3D printing is the answer to all of my students’ issues. It has gotten a few of the more challenging ones to focus on something productive and, from that, they have learned some important life skills. Curricula, Standards and technology are important – it’s what you do with them and how it positively impacts the kids that counts.”