Eric Flynn is the president of Turbo Boof, a company he started as a creative outlet for the graduate work he was doing in engineering school, and the coursework he was teaching in college.

Flynn started Turbo Boof seven years ago. The company is comprised of a team of young engineers that focus their creative energy on designing high-end aftermarket car parts. “I’ve always been fascinated with advanced manufacturing and cars,” says Flynn, “and the ability to apply design, engineering, and manufacturing into an automotive application quickly became my passion.” END_OF_DOCUMENT_TOKEN_TO_BE_REPLACED

Courtney Link (Instagram: @clanks) works in Production & Finishing at Objex Unlimited, where she puts the final touches on client projects.

Courtney Link was introduced to 3D printing just one year ago, but thanks to a background in art and great mentorship, her prints could fool you into thinking she’s been 3D printing for decades. END_OF_DOCUMENT_TOKEN_TO_BE_REPLACED

Lisa Cacciatore is the technology integration specialist at Castleton-Hubbardton Union School District. She collaborates with faculty and staff from K-8th grade to brainstorm how to integrate technology into their curriculum, while bringing creativity and enthusiasm to every facet of the job.

The Entry to 3D Printing 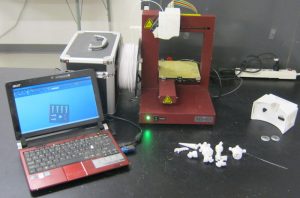 Benson Village welcomed the Afinia 3D printer into their school system three years ago. “After I had talked about 3D printing for some time, our district technology manager suggested we move forward with the idea,” says Batschelet. “I did plenty of research to find what I thought would be the perfect fit. Over and over, I saw the Afinia praised as the easiest to use out-of-the-box, easiest to repair on-the-fly, and reliable. So that’s what we chose, and I haven’t looked back!” END_OF_DOCUMENT_TOKEN_TO_BE_REPLACED

Eric Haddad is Chief Problem Solver at DiFi3D (Dimensional Fidelity). DiFi3D makes product development accessible for ‘the little guy’ by keeping costs down in the prototyping phase by using the Afinia H800 and H480 3D printers.

Haddad started DiFi3D in 2012 as a side-gig, and has grown it into a full-time job that he’s passionate about. “I help people refine and visualize their dream design, and set their product on the path to reality. I work a lot with individuals, and many times their ideas are tied to living a dream life. It’s my job to take their idea and move it to the next level, and help them visualize it,” says Haddad, who designs the product in CAD and 3D prints it. From there, he works directly with manufacturers, attains quotes, and streamlines the project for manufacturing or assembly. END_OF_DOCUMENT_TOKEN_TO_BE_REPLACED